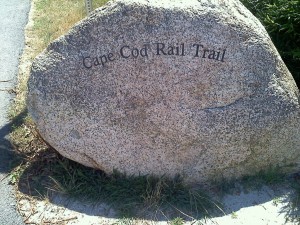 Once or twice each mile on the Cape Cod Rail Trail, the bike path crosses a road.Â  Nothing too intimidating, but some of them are busyish two-lane county highways.Â  The drivers see a sign that says “Bike Xing,” but they don’t see a Stop or Yield sign.Â  The bikers have the Stop sign.

But I was struck by how the drivers routinely would pull to a stop and wave the bicycles through the intersection.Â  Routinely as in every. single. time.Â  Finally near the end of the 19-mile ride I saw a driver buzz through the intersection as I approached — he would have had to slam on his brakes to stop.Â  The driver behind him stopped.

On reflection, I have mixed feelings about this.Â  Part of me is grateful to the gentle souls who took a moment out of their day to defer to a more-vulnerable bicycle.Â  But from a public safety standpoint, the person who has the legal right of way generally should exercise the right of way.Â  It’s safer that way because it’s what people expect.

By the end of the ride, we fully expected every driver to defer to us, and we started to get sloppy.Â  While breezing through one intersection, a bus driver who had stopped for us yelled out, “you have a Stop sign, you know.”Â  A good thing to remember for the person who has more at stake.

It was a beautiful day for a ride, sunny, breezy, highs in the 70s.Â  It’s actually a bit cold for water activities, but we’re enjoying the weather.

Cranky political commentary will resume soon enough.Â  For this afternoon, there’s ribeye, shrimp and corn on the cob for the grill.Â  I’m on vacation with a beautiful blonde who just spontaneously felt moved to tell me how much she loves me.Â  Life is good.