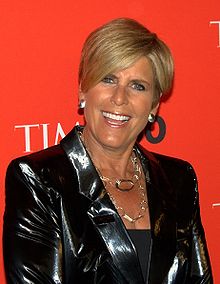 Bestselling author and TV host Suze Orman borrowed $50,000 from friends in 1980 to start a restaurant.Â  That’s about six times as much money as I owed in student loans after getting my Princeton degree the same year. Her bio makes reference to bouncing checks in those years, so at some point she had experience living close to the edge, although those days are several bestsellers and TV contracts ago.

So it’s surprising that she doesn’t know how credit cards work.Â  From her CNN column:

As we all know, if you run up a balance on your credit card and then decide not to pay the bill, there’s a huge price to pay. Your interest rate goes up, your credit score goes down and that triggers all sorts of costly dominoes to start falling. To not raise the debt ceiling is akin to refusing to pay your credit card bill.

Nope.Â  It’s akin to making minimum monthly payments on the credit card, while applying for an increase in your credit limit.Â  Tea Party Republicans are saying, this is it — no more increases in credit limits, you’re too far in debt already.

The debt ceiling has nothing to do with future spending. It’s simply a mechanism that allows the U.S. government to keep paying off the bills it has already run up.

Nonsense.Â  If the debt ceiling is increased by $2.4 trillion — the amount that Democrats and Republicans appear to be “close” to agreeing on — the government will be allowed to go $2.4 trillion deeper into debt.Â  Some ofÂ  that money will be used to pay existing obligations, and some of it will be used to pay new obligations that otherwise would have to be eliminated or deferred.Â  If you find yourself deep in a hole, the first thing to do is stop digging.

Let’s look at what happens when a family has maxed out its credit cards and can’t pay all its current bills.Â  (How do I know about this?Â  Um… I read about it in a book.)

Years ago, in the hit show “Roseanne,” the cheeky title character was arguing about money with her husband, who told her “don’t mess up my system” for dealing with the stack of monthly bills. “What system?” she said. “Pay the ones marked ‘final notice,’ and throw the rest away.”

Despite sounding somewhat decadent, that is, in fact, pretty good advice.Â  It’s essentially the system I used. (I’m happy to report that despite my modest current income, those days are long in my past.) It’s a system that needs to be coupled with ongoing debt-reduction efforts — the family needs to spend less, and/or someone needs to get a second job.Â  But when faced with the monthly emergency of not having enough cash to pay all your bills, while being maxed out on your credit lines, it makes sense to pay the bills where deferral will have the worst consequences.

All of this may sound like an argument against raising the debt ceiling — but in fact, I hope the ceiling gets raised, the sooner the better.Â  That’s because the stakes right now are higher than whether the arbitrary line in the sand gets drawn at $14.3 trillion or $16.7 trillion.Â  It would be very disruptive, in unpredictable ways, to bounce off an unmoving debt ceiling — and I fear the Republicans would get the blame for the disruption.

Let’s give ObamaÂ  the $2.4 trillion debt ceiling increase to get him past the election — that’s at least less than the $3.1 trillion debt increase that already has happened on his watch.Â  The GOP should not let the perfect be the enemy of the good — they’ve already succeeded in changing the context from “no” spending cuts to “how much” in spending cuts.Â  The single most important thing Republicans can do right now to improve the financial situation is to vote the most free-spending president in history out of office.Â  Let the election be about Obamacare — we know who to blame for that.

(Photo of Suze Orman by David Shankbone, via Wikipedia)