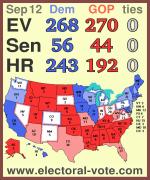 For the first time since I’ve been watching it, the electoral-vote.com map is showing a McCain victory, by the narrowest of margins.

I put the EV map in my sidebar with the thought that it makes more sense to count the votes the way the election will be decided — 50 state votes rather than one national one. I subsequently read someone opining that the national polls are a more reliable indicator of sentiment, because the state polls are taken less frequently and are of varying quality. This makes sense.

Of course, the only poll that counts, blah blah blah. Clearly Palin has given McCain a significant bounce, but it’s a long time (more than 7 weeks) until the election. I’m not sure I’ve ever actually watched a VICE presidential debate before, but I’m sure going to watch this one.