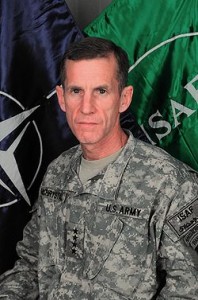 In today’s Washington Post, Bob Woodward reports on a long-awaited request from Obama’s hand-picked general in Afghanistan, requesting more troops for the war that candidate Obama claimed he wanted to win.

Gen. Stanley A. McChrystal says emphatically: “Failure to gain the initiative and reverse insurgent momentum in the near-term (next 12 months) — while Afghan security capacity matures — risks an outcome where defeating the insurgency is no longer possible.”

His assessment was sent to Defense Secretary Robert M. Gates on Aug. 30 and is now being reviewed by President Obama and his national security team.

McChrystal concludes the document’s five-page Commander’s Summary on a note of muted optimism: “While the situation is serious, success is still achievable.”

Now parts of the President’s party, desperately seeking a war to lose after being thwarted in Iraq, will turn up the pressure for surrender and retreat. I continue to be hopeful that Obama, who retained Bush’s Defense Secretary and Iraq strategy, will not want to be known to history as the president who lost in Afghanistan.