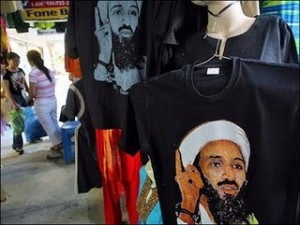 After bumming myself out yesterday with musings about a potential Israeli air strike against Iran’s nuclear facilities, I was glad this morning to stumble onto more upbeat news from the global war against Islamic fascism.

“Many students of terrorism believe that in important ways, Al Qaeda and its ideology of global jihad are in a pronounced decline â€” with its central leadership thrown off balance as operatives are increasingly picked off by missiles and manhunts and, more important, with its tactics discredited in public opinion across the Muslim world.

While stopping short of actually saying so, the article makes the case for staying the course in Afghanistan:

Even counterterrorism officials who agree that Al Qaeda is on the wane, for example, say the organization might well regroup if left unmolested in a lawless region in Pakistan, Afghanistan or Somalia.

And here’s the meat of the matter:

Nevertheless, some government officials do take quiet, if wary, satisfaction in two developments that they say underlie the broad belief that Al Qaeda is on a downhill slope. One is the success of military Special Operations units, the C.I.A. and allies in killing prominent terrorists.

In Pakistan, missile strikes from C.I.A. drone aircraft have taken a steady toll on Al Qaeda and its Taliban allies since the Bush administration accelerated these attacks last year, a policy reinforced by President Obama. A count of such strikes, compiled by the Center for American Progress in Washington, found a handful in 2006 and 2007, rising rapidly to 36 in 2008, and another 36 so far in 2009, nearly all in Pakistanâ€™s tribal areas.

In addition to thinning the ranks of potential plotters, the constant threat of attack from the air makes it far harder for terrorists to move, communicate, and plan, counterterrorism officials say. And while the officials say they worry about a public backlash in response to the civilians killed during the air attacks, those officials also say the strikes may be frightening away potential recruits for terrorism.

The second trend is older and probably more critical. The celebration in many Muslim countries that followed the Sept. 11, 2001, attacks has given way to broad disillusionment with mass killing and the ideology behind it, according to a number of polls.

Between 2002 and 2009, the view that suicide bombings are â€œoften or sometimes justifiedâ€ has declined, according to the Pew Global Attitudes Project, from 43 percent to 12 percent in Jordan; from 26 percent to 13 percent in Indonesia; and from 33 percent to 5 percent in Pakistan (excluding some sparsely populated, embattled areas). Positive ratings for Osama bin Laden have fallen by half or more in most of the countries Pew polled.

The phenomenon of Islamic fascism is broader than just Al Qaeda, but it’s heartening to see the decline of support for Al Qaeda in Muslim countries.Â  I’ve long believed that the bestÂ  hope for a stable peace lies in an Islamic Reformation, parallel to what Martin Luther kicked off in Christianity with his 95 Theses in 1517.Â  I just hope that Islam can reform itself more quickly than Christianity did.Â  More than 130 years of religious violence passed between the 95 Theses and the Treaty of Westphalia.

(Photo of pro-Osama T-shirts in Islamabad in 2007 from AFP, via Gateway Pundit.)