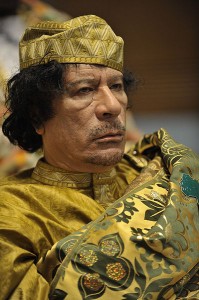 Today is my birthday (never mind what year), I’m off from work, and the entire Northeast seaboard is preparing for Hurricane Irene.Â  (The Web Goddess snapped a picture this morning of the huge line of people at the local Home Depot, waiting for delivery of an undetermined number of portable generators, expected to arrive at an undetermined time.)Â  So what’s on my mind on this Kirk-and-Irene-themed day?

Libya, of course. Specifically, whether President Obama deserves any credit for what tentatively seems to be shaping up as a reasonably OK outcome in the war against Muammar Gadhafi.

E.J. Dionne in the Washington Post thinks he does, and snipes at those who are less enthusiastic: “Itâ€™s remarkable how reluctant Obamaâ€™s opponents are to acknowledge that despite all the predictions that his policy of limited engagement could never work, it actually did.”

Not so fast.Â  Assuming Gadhafi actually goes down, Obama’s policy may have “worked” in the narrow sense of deposing the tyrant — although that was not our stated goal. (As George Will aptly said, “In Libya, mission creep began before the mission did,” and remember that Obama pledged to turn over leadership of the effort “in a matter of days, not weeks.”)Â  It remains to be seen whether America’s intervention will succeed in the category that should trump all others: advancing America’s interests.

Max Boot, not an Obama fan, finds the appropriate level of nuance:

With Muammar Qaddafiâ€‹â€™s downfall imminent, does Barack Obamaâ€‹ stand vindicated? To a certain extent, yes. Obama showed courage in intervening to prevent Qaddafi from retaking Benghazi and slaughtering its inhabitants. If he had not acted, it is doubtful Britain and France would have done so, and Qaddafi would have been in power for years to come. …

[N]ews accounts from Tripoli describe a state of chaos and a power vacuum that could bode ill for Libyaâ€™s future. The immediate post-Qaddafi period will be an acid test of whether the administration and its allies did enough planning and preparation to avoid a prolonged insurgency of the kind that has plagued both Afghanistan and Iraq. …

[I]f the Libyans fail to get their act together, and their nation becomes a failed state, make no mistake: For all the talk about how Libyans must determine their own future, a share of the blame for a negative outcome will come to rest in Washington, London and Paris. Having provided the support that enabled the rebels to prevail, the NATO powers, and the U.S. most of all, can hardly wash its hands of the country. The wisdom of Obamaâ€™s decision to intervene still rests in the balance.

Just so.Â  There’s plenty to criticize in Obama’s intervention in Libya — starting with the fact that he sought permission from the UN and from the despots of the Arab League, but not from the U.S. Congress.Â  (President Bush, on the other hand, launched the war in Iraq with broad bipartisan support in Congress.)Â  However, now that our Nobel Peace Prize-winning president has entered a third war, I’m certainly rooting for a positive outcome.Â  As Victor Davis Hanson said, “the only thing worse than starting a stupid war is losing it.”

I continue to be astonished that Obama entered this war in the first place.Â  And while “stupid war” may be a bit harsh, I think on balance we should not have gotten involved.Â  As I wrote in March:

Iâ€™m obviously not opposed in principle to the use of military force by the United States.Â  Iâ€™ve never stopped supporting the wars in Iraq and Afghanistan.Â  But we canâ€™t fix every problem everywhere, weâ€™re stretched financially and militarily now, and I think the Libyan intervention was probably a mistake.

But now that weâ€™ve done it, I hope itâ€™s successful. I donâ€™t root for any American president to fail, especially not in his role as commander-in-chief.Â  â€œSuccessâ€ would mean Gadhafi goes quickly and gets replaced by a new tribe thatâ€™s at least marginally more democratic, and the U.S. gets disentangled in â€œweeks, not months,â€ to use a more realistic version of Obamaâ€™s timeline.Â  It could happen that way, but Iâ€™m not optimistic.

The hope for the timeline now has slipped still further, to “months, not years” — but I’m at least slightly more optimistic about the eventual outcome.