I’ve just been notified that as of August 24, 2011, I have entered the august and distinguished pantheon of professional bloggers.Â  Specifically, I received my first payment from Google AdSense.Â  My autograph is now available for purchase.

It’s taken a lot of hard work and dedication to get to this point.Â  Since May 29, 2009, when I launched my first AdSense ads, I’ve made more than 300 posts to my blog.Â  Almost all of them involved a fair amount of research, writing and editing.Â  I keepÂ  telling myself that I should do more quickie blog posts with just a single observation about a single aspect of an issue.Â  But once I get started, it nearly always turns into an essay — I described this slippery slope in “Mary Meeker, Entitlements, Wikipedia Drift, and Why It Takes Me Three Hours to Write a Blog Post.”

My average time investment is certainly less than three hours (although that post took longer than that).Â  Let’s call it 90 minutes.Â  That adds up to more than 450 hours of blogging, plus an indeterminate but not trivial amount of time spent backing up, upgrading and enhancing the design and recovering from hackers.Â  500 hours is a reasonable estimate.

During that time, the blog helped launch “My International Consulting Practice,” although I don’t count that vast revenue stream as a direct payment for blogging.Â  Unfortunately, my two biggest traffic days — an Instalanch and a Sullivalanch — both occurred before I got started with AdSense. 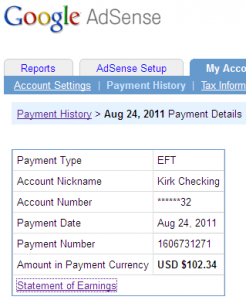 Enough background.Â  So how much is this lush AdSense payout that makes all the effort worthwhile?Â  If you know anything about AdSense, you know what’s coming.Â  Drumroll, please…

$102.34.Â  That, as my AdSense dashboard so helpfully calculates, is an average of $0.13 per day since I began publishing ads.Â  (I can almost hear you thinking: “Thirteen cents a day? Gotta get me summa that!”)

Hey, did I mention that I’m now a professional blogger?

Mary Meeker, Entitlements, Wikipedia Drift, and Why It Takes Me Three Hours to Write a Blog Post