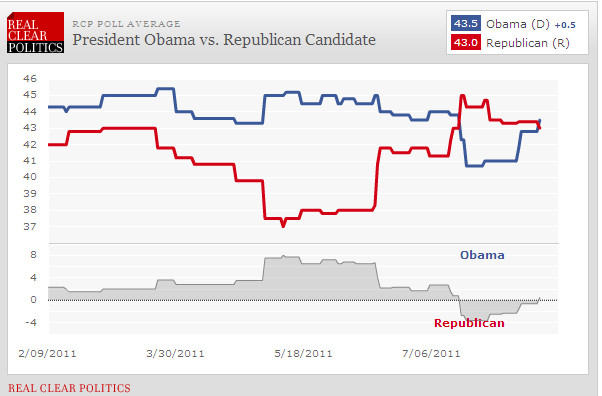 I wish I could be enthusiastic about any of the Republican frontrunners for President.Â  Let’s review:

Mitt Romney: As a successful business leader and former Republican governor in a deep-blue state, he has executive experience and a history of reaching across the aisle to get things done.Â  Unfortunately, the biggest thing he got done was the enactment of Romneycare, with its individual mandate for healthcare insurance.Â  Nominating Romney would undercut one of the GOP’s most potent issues.

Michele Bachmann: Do we really want to elect another charismatic junior legislator with no executive experience to the most powerful office in the world?

Rick Perry: He’s the nation’s longest-serving current governor and oversees the most economically dynamic state.Â  But his pitch-perfect announcement line — “I’ll work every day to make Washington, D.C., as inconsequential in your life as I canâ€ — was swiftly followed by some utterly stupid remarks attacking Fed Chairman Ben Bernanke as “almost treasonous” and saying “we would treat him pretty ugly down in Texas.”Â  I like Perry’s federalism and his pro-business stance, but I worry his mouth may cause him to self-destruct.

As a socially liberal Republican, I’ve largely reconciled myself to the reality that I will have profound differences on abortion and same-sex marriage with whomever the Republicans nominate.Â  (Giuliani would be an exception, but for that very reason, he has no chance of being nominated.) Social issues, important though they are, have to take a back seat to the economy and to the fundamental struggle over the size and scope of government.Â  I guess I’m rooting for Perry for now, but regardless who wins, I’ll almost certainly vote for the Republican nominee next November.

The polls have tightened up, but as you can see in the chart above, Obama has been polling behind “generic Republican” for most of the past several weeks.Â  Unfortunately, he’ll face a specific Republican with specific baggage next November.Â  And as the overview of matchups at Real Clear Politics shows, Obama polls handily ahead of each specific GOP challenger.Â  Vulnerable though Obama clearly is, the Republicans face an uphill battle.