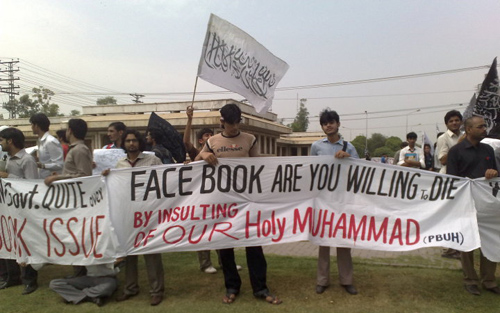 A "peaceful" protest in Lahore, Pakistan

I haven’t paid much attention to “Everybody Draw Mohammed Day” since I first wrote about it, but a lot of other 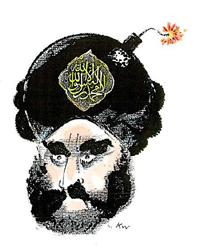 people have.Â  The May 20th observation has its own (very lengthy) Wikipedia page, multiple Facebook pages, including one with more than 63,000 fans, an EDMD blog, and a contest by Reason magazine.

No casualties as of yet in the inevitable backlash, although there’s a tepid implicit death threat in the sign carried by Pakistani students, above. Â  The main anti-EDMD Facebook page has more than 37,000 fans, and to their credit, the organizers are stressing non-violence.

… at the heart of the liberal project is ultimately a recognition that individuals, for no other reason than that they exist, have rights to continue to exist. Embedded in all that is the right to expression.Â No one has a rightÂ to an audience orÂ even to a sympathetic hearing, much lessÂ an engaged audience. But no one should be beaten or killed or imprisoned simply for speaking their mind or praying to one god as opposed to the other or none at all or getting on with the small business of living their life in peaceful fashion. If we cannot or will not defend that principle with a full throat, then we deserve to choke onÂ whatever jihadists of all stripes can force down our throats.

The theory behind “Everybody Draw Mohammed Day” is that the jihadis can’t kill all of us.Â  Let’s hope there are no casualties at all.

Meanwhile, Ayaan Hirsi Ali’s new book has downloaded to my Kindle, and I’m going to settle in to read about a woman who truly has stared death in the face in the cause of free expression.