Taranto aptly called it “a rookie mistake” when newly nominated Republican Senate candidate Rand Paul told an interviewer that he was troubled by the fact that the Civil Rights Act of 1964 — which Paul otherwise supported –Â  crossed the line of regulating behavior by private businesses.Â  However intellectually coherent Paul’s position might be in a narrow, libertarian-absolutist, freshman-dorm-room kind of way, politically and realistically it’s nuts.

Or as Taranto says:

In this matter, Paul seems to us to be overly ideological and insufficiently mindful of the contingencies of history. Although we are in accord with his general view that government involvement in private business should be kept to a minimum, in our view the Civil Rights Act’s restrictions on private discrimination were necessary in order to break down a culture of inequality that was only partly a matter of oppressive state laws.

If he’s going to play in the big leagues, Paul needs to stop making rookie mistakes. In discussing the horrific oil spill in the Gulf of Mexico, Paul apparently felt a need to stick up for the spiller:

“What I don’t like from the president’s administration is this sort of ‘I’ll put my boot heel on the throat of BP,'” said Paul who overwhelmingly won Tuesday’s GOP Senate primary in Kentucky and is a favorite of Tea Party activists. “I think that sounds really un-American in his criticisms of businesses.”

“I’ve heard nothing from BP about not paying for the spill,” Paul continued. “I think it’s part of this blame game society in the sense that it’s always got to be someone’s fault, instead of the fact that sometimes accidents happen.”

I’m a big fan of capitalism myself, but geez.Â  There will be other, better opportunities to criticize Obama and the Democrats for excessive corporate-bashing.Â  For now, Paul would be wise to simply refrain from joining the dogpile on top of the oil industry.

If I were to describe my political philosophy in one word, that word would be “libertarian.” My libertarian slogan of choice is “free people and free markets, under the rule of law.”Â  The “rule of law” part is a recognition that if you go too far down the spectrum toward small government, you wind up with anarchy.Â  To become a Senator, Rand Paul needs to stop following his father that far down the libertarian trail. 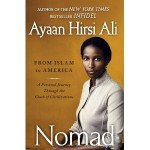 One of the best things you could do in the next seven minutes would be to watch John Stossel’s interview with Ayaan Hirsi Ali (whose latest book Nomad is available through my Amazon widget in the right column).Â  Here’s a sample of what she tells Stossel:

“If you are a Muslim and you leave Islam, it’s the obligation of every Muslim to come after you and kill you. Fortunately for me, and for other apostates of Islam, not every Muslim wants to kill us.Â  But it is in scripture, and it’s very important that we discuss that….

“There are people, again, who feel like they are following in the example of the prophet Mohammed if they kill people like me.”Â  [Because of the need for armed bodyguards around the clock] “my freedom is constrained, but still, I am alive, and I feel that I am free, and I feel that I can take part in this debate without having to fear for my life.”

In the midst of the controversy over “Everybody Draw Mohammed Day” it’s important to keep in mind the nature of the man being mocked.Â  The Prophet spread his message at the point of the sword, and apostasy was only one of many transgressions for which the penalty was death.Â  From the hadith Sahih Bukhari, Book 52:

No doubt, I would have killed them, for the Prophet said, ‘If somebody (a Muslim) discards his religion, kill him.’ …Â  A group of eight men from the tribe of ‘Ukil … killed the shepherd and drove away the camels, and they became unbelievers after they were Muslims. When the Prophet was informed by a shouter for help, he sent some men in their pursuit, and before the sun rose high, they were brought, and he had their hands and feet cut off. Then he ordered for nails which were heated and passed over their eyes, and whey were left in the Harra (i.e. rocky land in Medina). They asked for water, and nobody provided them with water till they died.

A good guided tour of the scriptural basis for Islamic fascism is available at TheReligionOfPeace.com, which keeps a helpful daily tally of terrorist attacks committed in the name of the Prophet.