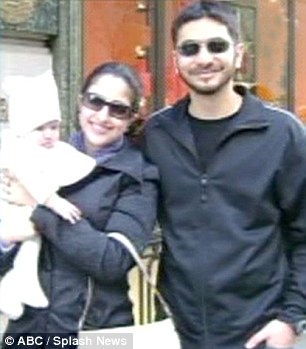 For whatever reason, I’ve resisted learning much about the Times Square bombmaker’s personal life.Â  I’ve been more interested in other aspects of the attempted attack, such as how his U.S. citizenship distinguishes him from the Christmas panty-bomber, or whether exceptions to the Miranda rule should be broadened.Â  (I vote yes.)

But today I stumbled across an in-depth profile of Faisal Shahzad in the New York Times, and I read it with a sense of queasy fascination.Â Â  Out of several candidates, I’ve settled on this as the passage that disturbed me the most:

That June [2006], he took a new job as an analyst at the Affinion Group, a financial marketing firm in Norwalk, telling a friend that his annual income had jumped to $70,000. Two months later, he finished his masterâ€™s degree in business. On weekends, Mr. Shahzad hosted barbecues, mowed his lawn and played badminton in the yard. His wife was pregnant.

Shahzad, pictured above with his wife and one of their two children, was living the American Dream.Â  Early press reports speculated that financial difficulties might have played a role in his radicalization, but the Times account makes clear that his home was foreclosed only because he abandoned it and stopped paying the mortgage.

Somehow this well-educated, solidly middle-class family man was so affected by a poisonous ideology that he drove a car bomb to Times Square and tried to kill random people — who might well have included attractive young families like his own.Â  Catastrophe was averted only because of his utter incompetence as a bombmaker.

We can’t rely onÂ  incompetence — the Christmas panty-bomber also failed, but jihadi-Major Nadal Hasan took far too many casualties. We can’t arrest every middle-class family man who expresses outrage about the Iraq war.Â  What can we do?