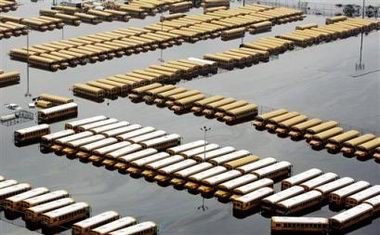 I think my credentials as a critic of President Obama are fairly well established, but it’s absurd to blame him for the oil spill, or for the failure (so far) to stop it.Â  And calls for Obama to show more anger have led only to the demeaning spectacles of Obama saying he wants to know “whose ass to kick,” and his press secretary saying “I’ve seen rage” from the President.

Usually I come down on the Bush side of Bush-Obama comparisons, but in this case, blaming Obama for the oil spill is even more absurd than blaming Bush for Hurricane Katrina.Â  The primary blame for the Katrina debacle goes to inept and corrupt state and local first responders (remember the cops looting stores and the scores of flooded buses that the city was supposed to have used for evacuations?)Â  But Bush has to answer for having appointed an executive of a show-horse association to head the Federal Emergency Management Agency.Â  A FEMA director with actual emergency-management experience might have realized earlier on that it was amateur hour in Louisiana.

The disaster in the Gulf of Mexico makes it more appropriate, not less, to open up limited areas of the Alaska National Wildlife Refuge to oil production.Â  If the oil rig explosion had occurred on land, rather than over a mile of deep water, the oil gusher would have been stopped weeks ago.

Tanker spills are a more serious problem than oil-rig accidents. As Steven F. Hayward writes in The Weekly Standard:

Even if the Deepwater Horizon spill lasts into the fall, it will still not even be the largest offshore spill in the Gulf of Mexico. That dubious achievement belongs to the Ixtoc 1, a Mexican platform near YucatÃ¡n that blew out in 1979 in circumstances similar to the Deepwater Horizon (the blowout preventer failed after a gas surge from the well). It took Mexicoâ€™s famously inept Pemex almost 10 months to stop the leak, by which time 460,000 tons of oil had leakedâ€”still the largest accidental spill in world history (Saddam Hussein deliberately fouled the Persian Gulf at the end of the first Gulf War with 1.2 million tons).

Finally, I can understand anger and frustration at BP, but certain expressions of that anger are ridiculous.Â  There’s no point in vandalizing BP stations — all that does is damage a local franchisee who has no say whatsoever in anything the corporation does.Â  And please spare me any further histrionics about keeping “a boot on BP’s neck” or pressuring the company to try harder.Â  The company’s stock price dropped more than 50% from the day of the accident to last week, wiping out $90 billion in market value.Â  Nobody on the planet wants the damage to end more than BP.