Big cyber-news today in Maplewood, NJ, the place one blogger once called “the center of the blogging universe.” The New York Times abruptly shuttered The Local, its New Jersey experiment in hyperlocal blogging.Â  I’ve chronicled the Maplewood BlogolopolisTM here, here, here and here. 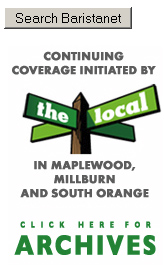 Instead of just shutting down, the NYT is passing its baton to Baristanet, a venerable (since 2004) hyperlocal news site for other parts of Essex County.Â  Baristanet has launched new homepages for Maplewood, South Orange and Millburn, the three towns covered by The Local.

Timestamps on their respective articles indicate that Mary Mann at Maplewood Patch broke the story a full 13 minutes before the NYT posted its own announcement on The Local.Â  Congrats, Mary!Â  (Of course, I could make my timestamp read whatever I want it to read, but Mary wouldn’t do that.)Â  The first cryptic comment on Maplewood Online was even earlier.Â  And the Maplewoodian weighed in a bit later in the afternoon.

After the Web Goddess alerted me to the news via IM, I promptly lurched into action.Â  Stealing a few minutes away from my day job (forgive me, Mother Lauren), I promptly posted a self-serving comment on The Local’s announcement, thereby creating a small flurry of traffic to my previous coverage.Â  Then I worked the rest of the afternoon.Â  Then I came home and watered the lawn and borrowed my neighbor’s spreader to put down some ScottsÂ® Turf BuilderÂ® With PLUS 2Â® Weed Control (no, this is not a paid plug… but Scotts, have your people call my people).

Eventually I connected with Mary Mann, hoping I could get some snarky, back-biting comments, but it was not to be.Â  “I’m very sorry to see The Local go,” she said.Â  (At least I think that’s what she said — we had terrible reception, despite trying four connections on different cell and land-line combinations.Â  I blame the Rooskie spies in Montclair for sabotaging the phones.)

So how about these Barista newcomers?Â  “Jolie Solomon is wonderful — very talented,” Mary said.Â  (Solomon is the former Patch contributor who will be anchoring Baristanet’s Maplewood coverage.)Â  “I’ve always thought there was enough room for everyone” in the Maplewood hyperlocal scene.

Such a nice lady.Â  (Disclosure: she sometimes publishes my stuff.)