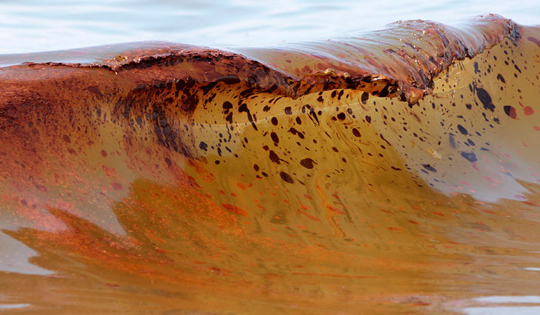 The President and the Left wing of his party believe that government is the answer to every problem.Â  Obama now is being savaged from the Left over an environmental disaster that government is powerless to stop.Â  I didn’t know what the issue would be, but I’m on record from before the inauguration predicting eventual disillusionment.

Thereâ€™s already plenty of opposition to Obama in the right-wing fever swamps of the Internets, of course….Â  But eventually, even mainstream media outlets will turn their guns on the man who, in the eternal formulation of insider Washington, will become known as â€œthis President.â€ No matter how much the media was in the tank for Obama during the campaign, no matter how enthusiastic they were in celebrating the coming of BAM-A-LOT, eventually Obama and his Administration will make missteps that even the most liberal papers cannot ignore.

Ironically, Obama has lost the Left over an issue where I think he’s been getting a bad rap.Â  But make no mistake — he’s lost the Left, based on reactions to yesterday’s Oval Office speech.Â  Daniel Foster has a good roundup in The Corner, including:

Olberman: “It was a great speech if you were on another planet for the last 57 days.”

Jonathan Chait said the part of Obama’s speech concerning Obama’s energy and climate bill “revealed just how much Obama is operating from a position of weakness.”

In a savage report taped before the President’s speech, Jon Stewart relentlessly matches the pious promises of Candidate Obama with the news reports about the breaking of those promises by President Obama.Â  The clip is well worth watching, but the screen grab below telegraphs the final punch line.

The honeymoon isnâ€™t over yet, and it certainly wonâ€™t end before the Inaugural. But starting next Tuesday (ok maybe Wednesday), when President Obama doesnâ€™t bring the troops home, doesnâ€™t close Guantanamo, doesnâ€™t end the recession, doesnâ€™t deliver national health insurance, doesnâ€™t roll back global warming and make the oceans recede â€” or at least doesnâ€™t do any of these things as fast as the Left would like â€” then things like the peccadillos of Tim Geithner will start to get more coverage.

I guess he did “deliver national health insurance,” sort of, but it’s appallingly bad legislation that will only grow more unpopular as the costs become more clear.Â  On the other issues he’s either run up against the limits of government power or discovered the pragmatic imperatives of leadership.

The biggest mistake of the Oval Office speech was the decision to deliver it at all.Â  I don’t understand what the Administration thought the speech could possibly accomplish.

(Photo from an Alabama beach at top by Dave Martin/AP, published by the Guardian of London)