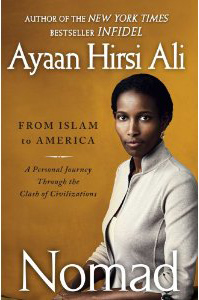 Ayaan Hirsi Ali has earned the right to be critical of Islam.

She was raised as a devout Muslim in Somalia and Kenya.Â  At the age of five, her genitals were cut in a barbaric Somali ritual at the insistence of her Islamic grandmother.Â  In her twenties, her Islamic father gave her in marriage to a distant cousin she barely knew.Â  After she fled to Holland and built a life for herself as a politician and filmmaker, a Muslim killed her filmmaking partner, Theo Van Gogh, and left a note stabbed into his chest indicating she would be next.Â  All this and more is recounted in her 2007 memoir, Infidel.

This remarkable woman, who now self-identifies as an atheist, has published a second memoir, Nomad: From Islam to America, which I’ve just finished reading.Â  She’s well aware that Islamic scripture prescribes death for apostasy, and she is accompanied by armed guards wherever she goes.Â  But the constant threat has not blunted her views or the clarity with which she declares them.Â  She’s not a fan of multiculturalism:

She calls for an Islamic Enlightenment:

The Muslim mind needs to be opened.Â  Above all, the uncritical Muslim attitude toward the Quran urgently needs to change, for it is a direct threat to world peace… The Muslim mind today seems to be in the grip of jihad.Â  A nebula of movements with al Qaeda-like approaches to Islamic precepts has enmeshed itself in small and large ways into many parts of Muslim community life, including in the West.

Ayaan Hirsi Ali is a brave voice in a fight for the soul of Islam.Â  Another such voice is M. Zuhdi Jasser,Â  head of the American Islamic Forum for Democracy.Â  Unlike Ali, Jasser continues to be a devout Muslim — but like her, he understands the threat posed by some of his co-religionists.

As devout Muslims who are anti-Islamist we feel that Muslims have to lead the war of ideas against political Islam (Islamism) from within devotional Islam. Islamists have a well-established transnational global network of entities hatched from Islamist groups like the Muslim Brotherhood and its offshoots. Whether we care to admit it or not, Islamists are at war intellectually and kinetically with western liberal democracies.

Today comes the news that: “Two New Jersey men arrested at a New York airport planned to travel to Somalia to ‘wage violent jihad,’ and also had expressed a willingness to commit violent acts in the United States.”Â  The two had been under surveillance for more than three years.

The scary reality is that our enemy lives among us. Thank God for Muslims (and ex-Muslims) like Jasser and Ali who are brave enough to help us understand what we face.