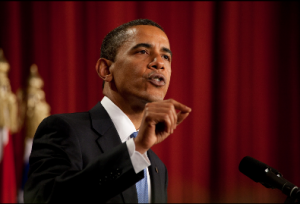 President Obama sometimes sounds a lot like President Bush — and I mean that in the nicest possible way.

But I do have an unyielding belief that all people yearn for certain things:Â  the ability to speak your mind and have a say in how you are governed; confidence in the rule of law and the equal administration of justice; government that is transparent and doesn’t steal from the people; the freedom to live as you choose.Â  These are not just American ideas; they are human rights.Â  And that is why we will support them everywhere.

America’s belief in human dignity will guide our policies, yet rights must be more than the grudging concessions of dictators; they are secured by free dissent and the participation of the governed. In the long run, there is no justice without freedom, and there can be no human rights without human liberty…. Eventually, the call of freedom comes to every mind and every soul. We do not accept the existence of permanent tyranny because we do not accept the possibility of permanent slavery. Liberty will come to those who love it.

If the passages were swapped one for the other, neither president would miss a beat.

I don’t want to make exalted claims for the speech. It was a mixed bag and there are limits to the effect any one speech can have. But I think some in the conservative blogosphere are pronouncing it a scandal because they leave out all the good things. Consider: He extolled America as “one of the greatest sources of progress that the world has ever known”; pledged we will “relentlessly confront violent extremists who pose a grave threat to our country”; condemned Holocaust denial as “baseless, ignorant, and hateful”; said “it is a sign of neither courage nor power to shoot rockets at sleeping children, or to blow up old women on a bus”; insisted that “the Arab-Israel conflict should no longer be used to distract the people of Arab nations from other problems”; and called for more democracy, religious freedom, and women’s rights in the Muslim world. And he got a standing ovation.