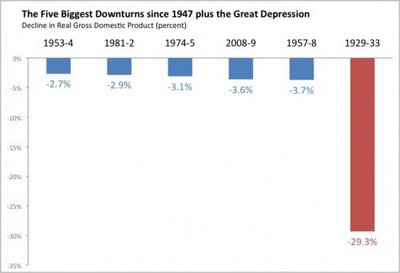 Think of this chart (from Donald Marron, via Greg Mankiw) the next time you hear someone say that we are in the worst economic downturn since the Great Depression.Â  Based on GDP, it appears we’re in the worst downturn since 1958 — and since I was born that year, I reject the idea that it was a long time ago.Â  If GDP declines by another 20 basis points or so, it then may be technically accurate to talk of the worst decline since the Depression — but the comparison will be no less misleading.

Back in March I highlighted unemployment data showing that the jobless rate was not (yet) as bad as 1982.Â  With three more months of job losses, we’re getting closer –Â  the May rate of 9.4% is closing in on 1982’s full-year rate of 9.7%.Â  But while many economists expect the rate to climb to over 10%, the rate of increase in joblessness has declined for four months in a row, and the job losses announced today were lower than expected. The Great Depression? 25% unemployment.

While we’re on the subject of productivity, if what you’ve just read makes sense to you, consider the possbility that I might be able to help you or your organization meet your communications needs.