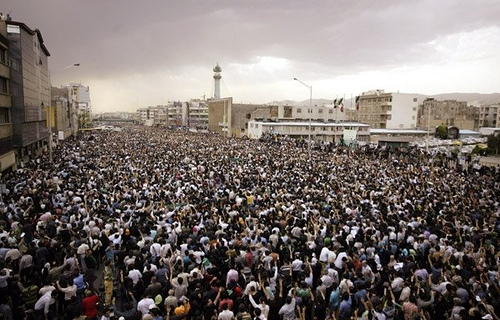 I’ve said that regarding foreign affairs, Obama has been serving Bush’s third term.Â  It’s a bit tongue-in-cheek perhaps, but there’s plenty of substance behind the label.Â  So I find myself wondering how the Obama Administration’s response to the turmoil in Iran will compare with what Bush might have done in a third term.

Obama Administration officials still hope they can talk Khamenei out of developing nuclear weapons and supporting Hamas and Hezbollah. This is delusion on stilts. Khamenei canâ€™t even compromise with his own regime or his hand-picked presidential candidates. He placed them under house arrest, along with a Grand Ayatollah, and deployed thousands of violent enforcers into the streets. Not only does he confront the world, he is at war with his very own country. …

Military action against Iran should be the very last option and used only if everything short of it fails. Dialogue, though, is only the first option, one that has been failing for three decades. And there is a vast range of options between war and discussion.

I think Totten is right about the nature of the Khamenei regime, but I have two issues with his analysis.Â  I love the stilts metaphor, but I’m willing to give Obama some benefit of the doubt about whether he will change course in the face of changing reality.Â  He certainly changed course sharply in Iraq, which gives me hope that he’ll consider doing so in Iran.

And I by no means am advocating a hasty war in Iran, but I have an immediate strong reaction every time I hear words to the effect that war should be a last resort, only if all else fails.Â  There are always other options besides war.Â  There may be no good options, but passivity, appeasement and surrender, for example, are always options.Â  “Last resort” therefore becomes a euphemism for “never.”Â  Totten is on stronger ground when he says “there is a vast range of options between war and discussion,” and I hope to see Obama pursue some of those options for putting pressure on Iran.

The administration hasn’t taken a strong stand yet on the Iranian elections, although Vice President Biden has questioned the legitimacy of the results.Â  As Gordon Robison writes:

The Obama administration appears concerned mainly with not painting itself into any rhetorical corners. In a situation where events are fluid, and it is unclear even who all of the key players are, that seems, at least for now, like a good policy.

Bill Kristol issues a clarion call to Republicans who might be tempted to engage in Obama bashing:

Presuming ahead of time that Obama will fail to exercise leadership, and cataloguing this episode pre-emptively as another in a list of Obama failures, would be a mistake. The U.S. has a huge stake in the possible transformation, or at least reformation, of the Iranian regime. If there’s some chance of that happening, and some chance of U.S. policy contributing to that outcome, we should hope Obama does the right thing, and urge and pressure him to do so–because then the United States will be doing the right thing, and the United States, and the world, will benefit.

It’s still far too early to grade Obama’s performance on Iran.Â  I’m cautiously hopeful.Â  Hat tip for the Kristol and Robison quotes to Andrew Sullivan, who continues to be all over the developments in Iran.