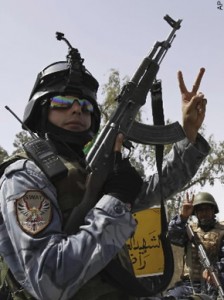 In the midst of Bernie Madoff, Governor Sanford, cap-and-tax, unrest in Iran and the continuing deceasement of MJ, take a moment to note a happy milestone: The orderly, scheduled withdrawal today of American troops from major cities in Iraq, turning over primary responsibility to the Iraqi security forces.

The “cradle of civilization” is rising from the grave again.

Yes, sectarianism, old grievances and the greed for power may deliver future crises — even an eventual civil war. An unnatural state with grossly flawed borders, Iraq has more obstacles to overcome than any of its neighbors except Lebanon.

But our achievement remains profound: We gave one key Arab state a chance at freedom and democracy. We deposed a monstrous dictator who butchered his own people and invaded two foreign countries. And we didn’t quit, despite the scorn of the global intelligentsia.

Update: Peter Wehner has a similar, more detailed take at Commentary.Â  His conclusion:

The ultimate wisdom in initiating the Iraq war is still to be validated by contingent events still to unfold. What is happening today is a transition, not a final triumph. And while Iraq is today a legitimate, representative, and responsible democracy, it remains fragile. Hard-earned progress can still be undone. The Iraqi military will have to prove it can provide security to its citizens. Relations between the Iraqi government and the semi-autonomous Kurdistan Regional Government in the north, particularly over the oil-rich province of Kirkuk, are tense. None of us can foretell the future, and almost all of us have been wrong about some aspect of the war or another.

Still, it is worth pointing out that those who wrote off the war as unwinnable and a miserable failure, who made confident, sweeping arguments that have been overturned by events, and who had grown so weary of the conflict that they were willing to consign Iraqis to mass slaughters and America to a historically consequential defeat — they were thankfully, blessedly wrong. And the Land between the Rivers, which has known too much tyranny and too many tears, may yet bind up its wounds.

(Photo of Iraqi soldier by AP)