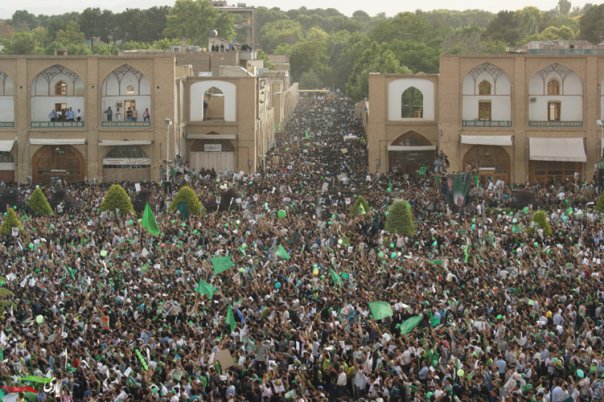 The question in the headline virtually answers itself. One side is a repressive, terror-sponsoring regime that has waged war against America, both directly and by proxy, since 1979.Â  The other side consists of hundreds of thousands of citizens whose democratic aspirations have been thwarted in a transparently stolen election, and whose peaceful assemblies have been attacked with governmental batons and guns. Decisions, decisions.

Set aside the fact that it was a sham election among clerically pre-approved candidates for a largely figurehead Presidency. Set aside the lack of resemblance between opposition leader Mir-Hossein Mousavi and Thomas Jefferson. Mousavi might or might not have provided real change as President — but the Iranian people certainly thought they were voting for change.

Obama has said “it is not productive, given the history of US-Iranian relations to be seen as meddling — the US president, meddling in Iranian elections.”Â  You know, that whole Mosaddeq thing in ’53.Â  There’s a surface logic to that.

The Iranian regime has been a self-declared enemy of America for three decades. There now appears to be considerable popular Iranian sentiment for regime change.Â  There might once have been a tactical justification for Obama’s efforts to make nice with the regime… but the facts on the ground have changed.

No, I’m not saying we should go to war in Iran.Â  I’m saying that the leader of the world’s beacon of democracy should be able to muster a few words in support of the Iranian people and their hopes for a democratic future.

Contrast Obama’s expression of “deep concerns” with the forthright declarations of Nicolas Sarkozy, the president of… um… France:

“The extent of the fraud is proportional to the violent reaction,” said the French leader.

“It is a tragedy, but it is not negative to have a real opinion movement that tries to break its chains,” Sarkozy said.

“If Ahmadinejad has really made progress since the last election and if he really represents two thirds of the electorate… why has this violence erupted?”

I continue to hope that Obama will evolve beyond his campaign rhetoric regarding Iran, as he already has evolved so decisively regarding Iraq.Â  But first he’s going to need to get past his sense of shame at a CIA operation that occurred before he was born.