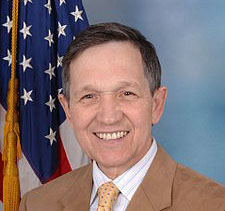 When Nobel Peace Prize laureate Barack Obama launched an air war against the Libyan regime without Congressional approval in March, he said he expected the action to last “days, not weeks.”Â  In a post about “the bizarreness of it all,” I tried to keep an open mind about the intervention and said I was hoping for a more realistic “weeks, not months” timetable.

New layers of bizarreness emerged today, as the GOP leadership in the House appears to be helping Obama fend off a challenge from his left.

Ohio Democratic Rep. Dennis Kucinich has sponsored legislation aimed at forcing the Obama administration to stand down from the Libyan adventure. As reported in The Hill:

GOP leaders faced the possibility that the measure could pass unexpectedly and embarrass the Obama administration on the world stage.

â€œWe donâ€™t want necessarily to call for withdrawal, but a lot of our members are saying, â€˜Why are we in Libya and not in Syria?â€™ â€ a House Republican leadership aide said.

The aide said some members who have concerns about the presidentâ€™s Libya policy are also worried about the precedent that would be set by passage of a resolution calling for immediate withdrawal. Other members dispute the constitutionality of the War Powers Resolution, which grants Congress the power to force a drawdown.

As Andy McCarthy notes, the War Powers Resolution probably is unconstitutional — certainly every president from either party has so claimed since the legislation was passed in 1973.Â  But it is the law, and President Obama clearly is in violation, or about to be.

But the fascinating aspect of this episode is that the GOP leadership is passing up an opportunity to score points against a President of the other party to avoid undercutting that president on the world stage.Â  Compare that with Senate Democratic leader Harry Reid’s disgraceful 2007 declaration that “this war is lost” — just as the war in Iraq was starting to be won.Â  (A war launched after months of debate, and with broad bipartisan support in Congress.)