Look to Greece, the cradle of democracy, to see what happens when the people no longer are able to vote themselves bread and circuses.

From the Voice of America: 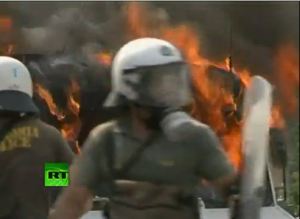 Screen grab from a YouTube video - I can't embed it for some reason, but click image for video

Workers in Greece are in the second day of a 48-hour general strike, and the country is all but shut down by the protest action against the new round of austerity reforms.

Some 20,000 demonstrators gathered in Athens on the first day of the general strike Tuesday. Initially peaceful, the protest turned violent. At least 4,000 police officers armed with stun guns, tear gas and batons fought protesters who hurled rocks and firebombs.

Many protesters feel the $40 billion austerity plan will impose harsh penalties on workers and pensioners, while sparing the wealthy.

EU officials had warned that Greece had no choice but to adopt the austerity plan.

Eventually somebody takes the credit card away.

(Update: I fixedÂ  the image link — NOW you can get to the video by clicking the image.)