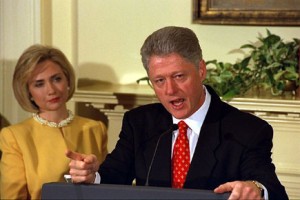 "I did not have sexual relations with that woman"

Apparently the former president thinks Anthony Weiner should take one for the team:

First Read: “While embattled Democratic Congressman Anthony Weiner seems intent about staying in his job — and he’s been bolstered by a poll showing that a majority of his constituents say he shouldn’t resign — we can report that Democratic leaders, including former President Bill Clinton, are frustrated and some even furious at him. The reason: He isn’t doing his party any favors by staying in his job. The VERY few folks advising him to stay are the only folks he is listening to. Monday will be intense for him, because the House is back and the Democratic caucus may speak as a group.”

I voted for the man twice (three times if you include my vote for Gore in 2000), and I generally think he was a pretty successful president.Â  But Bill Clinton — he of the cigars and the perjury and the finger-wagging and the 14-month impeachment ordeal and the professed ignorance of the meaning of “is” — should leave it to his wife to deliver any resignation advice.Â  Bill Clinton is the poster child for why Weiner should try to ride out the storm.