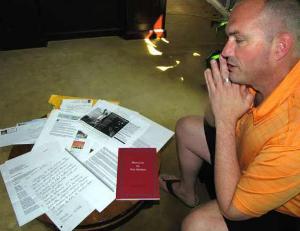 The Web Goddess is an Episcopal communicator, and posted last week on the Facebook page of the Episcopal Diocese of Newark about the grief a priest has been catching in Montclair, some 20 minutes north of our own beloved parish in Maplewood:

The Rev. Andrew Butler of Montclair’s progressive St. John’s Episcopal Church has been receiving hate mail, calling him a “damn fool” and saying that he has made a “mockery out of Christianity,” because he decided to hold an interfaith worship service for both Muslims and Christians. …

The service at the church, at 55 Montclair Ave., began with a call to prayer. Verses from the Quran and the Bible were read, led by the church’s rector, the Rev. Andrew Butler, and Abdul-Alim Mubarak-Rowe, assistant imam at Masjid Waritj ud Deen in Irvington, and journalist Anisa Mehdi.

“We have interfaith couples in our church, so the whole notion of being married to someone of a different faith is not new for a lot of folks here, so it really wasn’t that much of a stretch for our parish,” Butler said.

But some people don’t see it that way – including, apparently, some men of the cloth.

One of the emails came from a retired Orthodox priest who wrote: “To read selected bits from the Koran, in a so-called Christian Church service, is apostasy. What a fool you are to believe that Christianity and Islam worship the same God … You are the sort of priest that has made a mockery out of Christianity, one that is unable to stand up for the faith … Let me give you a bit of advice, son, the entire meaning and purpose of life is to attain heaven. If you believe that this sort of compromise is going to bring you or your congregation closer to heaven you’re a damn fool. Chip it in stone.”

Butler said many of the people who wrote to him called themselves “concerned Christians.”

Set aside the arrogance of presuming to know who is and is not going to heaven.Â  Set aside theological issues of all sorts.Â  The complainers have chosen a particularly short-sighted way of manifesting their religiousity and their revulsion of Islam.

America is at war with a global enemy motivated by Islam — but if Islam itself is the enemy, we’re all in trouble.Â  Father Butler should be commended, not attacked, for working to build bridges between Muslims and Christians.

Avid readers of All That Is Necessary — if such people exist outside my family — may at this point be saying “Wait a minute, Petersen: how do you square this post with your repeated objections to the Ground Zero mosque?”

The Ground Zero mosque — which is two blocks from Ground Zero and is much more than just a mosque — thankfully seems to be stalled for financial reasons.Â  If you look at some of the links in the previous paragraph, you’ll see I’ve argued that the site proposed for a $100 million, 13-story Islamic trophy building is a deliberate provocation.Â  My go-to guy for Muslim moderation, M. Zuhdi Jasser of the American Islamic Forum for Democracy, has my back.

Father Butler’s interfaith service is exactly the opposite — a deliberate effort to find common ground between the world’s two largest religions, or at least to increase their comfort level with each other.Â  I wish I had been there.