Quick reaction on my lunch break: We won.

Yes, there are pitfalls and concerns on the road ahead, but it’s one heck of a lot more appropriate now to declare the war “won” than it was for Senate Majority Leader Harry Reid to declare in 2007 that “this war is lost.”

Obviously it was Bush who (eventually) found the winning strategy, but Obama deserves props for staying the course. 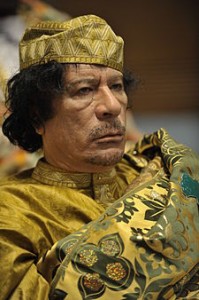 (Hey, maybe I should use song lyrics in all my blog posts! It could be my gimmick!Â  I wish I knew more song lyrics!)

I still find it astonishing and inconsistent that Mr. Nobel Peace Prize entered a war of choice in Libya.Â  But as VDH said, “the only thing worse than starting a stupid war is losing it,” and it looks like there is no further danger of losing to Gaddafi.

And the world… will be a better place…

So what comes next in Libya and the region?Â  Two takes from The Corner, eighteen minutes apart — one hopeful, one non.Â  John P. Hannah of the Foundation for Defense of Democracies, is hopeful:

Qaddafiâ€™s inglorious end sends … a powerful reminder that, try as they might, the regionâ€™s despots cannot through blood and brutality forever hold off historyâ€™s harsh judgement. Assadâ€™s head will rest far less easy tonight. The morale of the Syrian people will receive a much-needed boost to endure the difficult days that no doubt still lie ahead. And perhaps most importantly, the hard men around Assad who have continued to do his dirty work, will have new cause to save their own skins by reassessing their misguided loyalties to a leader who is dragging them and their community ever closer to catastrophe. With a strategic stake in Syriaâ€™s fate that dwarfs our interests in Libya, the United States would be well advised to exploit the openings created by Qaddafiâ€™s terminus to re-energize the effort to depose Assad, short-circuit the civil war that he is struggling mightily to ignite, and deliver a crippling blow to the Iranian terror machine that so threatens our interests and those of our allies.

His boss at FDD, Cliff May, almost immediately followed up with a sour note:

If the Great Arab Revolt â€” â€œArab Springâ€ is a hopeful, not descriptive term â€” ends up only removing Qaddafi and, from neighboring Egypt, Hosni Mubarak, a despot who was, nonetheless, a reasonably pliant client of the U.S., and if Iranâ€™s theocrats remain in power and manage to save the Assad dynasty in Syria while continuing to use Hezbollah to control Lebanon and sponsoring Hamas in Gaza, the lesson will be clear: It is more dangerous to be Americaâ€™s ally than its enemy.

Such a lesson will carry long-term strategic consequences. If there are strategic planners in the current administration, now would be a good time for them to start worrying.

Is the glass half full or half empty?Â  The answer is “yes.”Â  Welcome to the geopolitics of the Middle East.

What a long, strange trip it’s been…