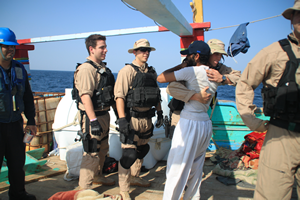 If you read only one news article today, you must read the dramatic NY Times account of the U.S. Navy’s rescue of Iranians from Somali pirates.  As luck would have it, a Pulitzer-prize winning reporter and photographer were embedded on one of the naval vessels.

It’s hard to pick the best aspect of this story.  There’s the irony of the U.S. rescuing Iranians. There’s the mental image of the pirates throwing grappling hooks over the rail of the target vessel.  There’s the clever tactic of setting the first set of pirates free, only to follow them to their mother ship.

In another bizarre coincidence, the U.S.S. Kidd, part of an international anti-piracy task force, happened to have on board a chief petty officer who speaks Urdu.  Urdu is the national language of Pakistan, not of Iran… but the Iranian captain was from near the Pakistani border. Even as the pirates listened, the captain was able to ask for help in Urdu.

Of course, whenever a news development reflects well on the U.S. military, some people quickly look for ways to diminish it. On CNN’s “Security Clearance” blog, someone named Larry Shaughnessy snarked:

Arrgh.  Props to the Iranian captain, but why go out of your way to try to tarnish what the Navy did?  I prefer to stay focused on the positive story line. Of course, I’m a sucker for any Navy-versus-pirates narrative, since I’ve got a son in the biz.