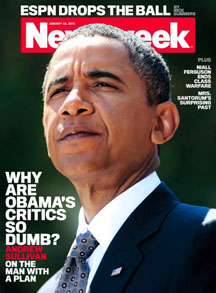 Newsweek, a once-important news magazine now owned by a liberal blogging site, has a cover this week offering me the opportunity to let Andrew Sullivan, a once-independent blogger, explain to me why I am “dumb.”Â  Grateful though I am for Newsweek‘s efforts to improve the tenor of our national discourse, I’m going to pass.

I am, however, enough of a blogosphere junkie to be interested in how Sullivan’s six-person “personal” blog responds to the firestorm of criticism the cover has rightly received.Â  I also know from my own long-ago journalism days that authors almost never write their own headlines, and Sullivan confirms that’s true in this case.Â  Sullivan professes to be perplexed by the criticism:

None of these critics shows any sign of having read the actual article. Is it too much to ask that they rip me apart after thinking rather than before? It’s not a book, for Pete’s sake. It’s less than 3,000 words, and has strong criticism of the left in it. Maybe the headline, which I didn’t write, set them off.

Sullivan, a former conservative, has a talent for outraging people with whom he once made common cause.Â  Nevertheless, he’s an extremely talented writer, and certainly is capable of thoughtful and nuanced argumentation.Â  He has to understand how offensive the cover headline is.Â  The headline of his own blog post announcing the cover — a headline that he did write, or at least controlled — is “Why Obama Should Be Reelected.”Â  The article itself, once you get past the disgraceful cover, is headlined “How Obama’s Long Game Will Outsmart His Critics.” I’m inclined to disagree with the premise, but if the article were positioned that way, I might actually want to read it.

Even though this is a case of an author being wronged by a headline writer, I’m not inclined to let Sullivan off the hook entirely.Â  Sullivan, a true pioneer of blogging as an independent medium, now appears so beholden to Tina Brown & Co. that he can’t even manage the mildest of complaints about the utterly inappropriate headline.

How do I know this?Â  His minions publish a “Daily Wrap” post each day cataloging the three dozen blog posts Sullivan writes or signs off on in an average day.Â  Here’s the overview of Sully’s posts about what the blog carefully calls “his Obama defense”:

Today on the Dish, Andrew called out Fox News for making him persona non grata – which potentially producedÂ an on-air debate over the blockbuster Newsweek piece with Megyn Kelly – and defended his Obama defense here, here, and here.

Feel free to follow the links if you wish — Sullivan gave my humble blog an exciting traffic spike once back in the day, so I won’t begrudge him the traffic from my vast audience (hi Mom!) But I can tell you that I read all of the posts, and while he carefully avoids echoing the incendiary headline, there’s no hint of any criticism of it.

After years of snotty elite references to stupid right-wingers versus “the reality based community,” can’t Sullivan understand why conservatives might boycott an article that calls them “dumb” as an opening gambit?

But but but… the dumb people are not just conservatives!

Just browsing at a few of the right-wing blogs, I see that they have attacked it without actually, you know, reading it…Â Half the article is devoted to liberals and Democrats!

In a previous incarnation at the Atlantic magazine, Sullivan’s blog proudly proclaimed that it was “of no party or clique.”Â  But he has become so indoctrinated into the cult of Obama that he defends The One against all comers, from the right or the left.

Yes, Mr. Sullivan, I’m criticizing your article without reading it.Â  I’m pretty comfortable with that decision. If some ink-stained clown put a gratuitous racial slur in a headline over my criticism of presidential policies, I wouldn’t expect to win many converts with that post.