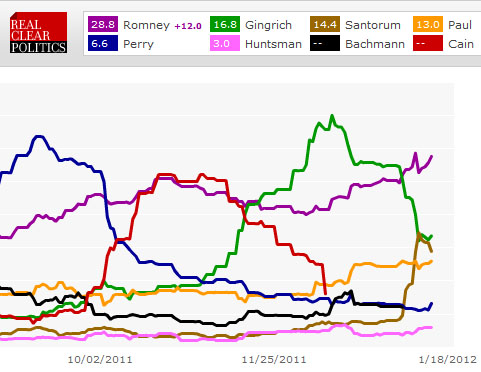 I’m watching the GOP campaign through a rotating filter of boredom and frustration. I mean, c’mon — I declared Romney the winner just hours after the Iowa caucuses.Â  At the risk of making a distasteful reference, could we all just move on?

It’s hard to believe we’re still reading about So-and-So challenging What’s-His-Name for second place in Such-and-Such a state.Â  Unless somebody challenges Romney for first place, it’s over.Â  In the Wall Street Journal, Karl Rove breaks it down:

In an open race for the GOP nomination, no Republican has won both Iowa and New Hampshire, as Mitt Romney has. No one has come in fourth or fifth in New Hampshire, as Newt Gingrich and Rick Santorum did, and become the nominee. No one has entirely skipped Iowa, as Jon Huntsman did, and won elsewhere. No one has recovered after grabbing the 1% that Rick Perry received in the Granite State. And no one became the nominee after failing to win one of the first two contests, a position in which Ron Paul finds himself.

Rove apparently wanted to refer to each of the non-Romneys by name, so Ron Paul got his turn in the final sentence.Â  However, note that all of the non-Romneys have failed to win one of the first two contests.Â  Yes, yes, Santorum didn’t lose by much in Iowa.Â  But a close victory is still a victory.

The non-Romney flavor-of-the-week contest has become almost comical.Â  The chart above from the tracking poll at Real Clear Politics shows first Perry, then Cain, then Gingrich popping briefly into the lead, only to wither quickly in the harsh spotlight of front-runnership.Â  Perry kept chewing on his toes, Cain was exposed as a foreign-policy lightweight well before the sexual allegations, and Gingrich quickly reminded us that he’s temperamentally unsuited to high government office.Â  Santorum’s boomlet has already peaked after his near-tie in Iowa — and if you go all the way back to August, Michelle Bachmann won the Iowa Straw Poll.Â  Ask President Huckabee about the predictive value of an Iowa victory.

Through it all, Romney’s support trended upward while fluctuating in a narrow band.Â  A recent Washington Post article points to the benefit of having run before:

In five of the last six presidential elections, Republicans have chosen candidates they had rejected before — Ronald Reagan, George H.W. Bush, Bob Dole and McCain. The exception was George W. Bush in 2000, the son of the former president well- known to party insiders.

This is not precisely correct — it should refer to the last six presidential elections without a Republican incumbent.Â  But more substantively, the author ruminates at length about the historical trend while missing the most obvious point.Â  A previous credible run for president is a huge advantage because whatever skeletons there may be get plucked from the closet in the first campaign.Â  Romney has essentially been running for president for half a decade now, and there’s no dirt left to uncover.