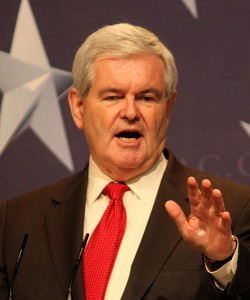 I’m not a fan of Newt Gingrich, but despite his unappealing attributes, he is an intelligent and thoughtful man who understands how Washington works, and who sometimes has ideas worth hearing.

He believes strongly that the debt ceiling is the wrong fight for the GOP to use what little leverage it has to force spending cuts. On reflection, I think he’s right. The debt ceiling would be a much better battleground than the so-called “fiscal cliff,” but Gingrich argues persuasively that two other looming deadlines offer better options.

President Obama set the stage Saturday with his weekly radio address when he announced that he will insist on a clean debt ceiling. In doing so he actually outlined for Republicans the two fights they can win. …

He suggested that the time for Congress to draw the line on spending is before they â€œrack up the billsâ€ â€” to paraphrase the president.

We have two immediate opportunities to heed the presidentâ€™s words: the Sequester bill that is coming up in 60 days and the Continuing Resolution at the end of March.

There is an enormous difference between the Continuing Resolution, the Sequester bill and the debt ceiling. The debt ceiling involves the faith and credit of the United States. It can not be held hostage because the crisis impact of failing to pay the governmentâ€™s debts would be immediate, worldwide, and shattering.

Every element of the business community and the news media will spend the next two months beating up Republicans if the debt ceiling is the focus of the conflict. This past weekendâ€™s media focus is just a taste of what is coming.

If Republicans fall for the debt ceiling trap they will once again be isolated in a corner, identified as negative extremists, and ultimately forced to back down with maximum internal conflict and bitterness among conservatives and Republicans.

Will the House GOP heed the words of the former Speaker? Some of them certainly will vote against allowing the country to go further into debt. But for the reasons Gingrich states, I expect enough of them will step back from the brink (or they will “cave in,” if you prefer that metaphor) to pass a debt limit increase.

But there’s no guarantee.Â  Republicans who vote to raise the debt ceiling without getting spending cuts of an equal amount will face intense fire from their right, including the risk of facing a more conservative Republican in the next primary election.Â  As former Bush speechwriter Marc Thiessen wrote in the Washington Post:

If Republicans stick to their guns, come February, Obama will agree to deep spending cuts in exchange for a debt-limit increase. There is a reason why every significant debt-reduction bill in the past 27 years â€” starting with the Gramm-Rudman-Hollings Act in 1985 â€” was linked to a debt-limit increase: Itâ€™s the only thing that forces Washington to enact spending cuts. With a president in office who believes â€œwe donâ€™t have a spending problem,â€ itâ€™s the only thing that can force them today.

If the magic-coin episode [the silly idea to mint a trillion-dollar coin – KP] teaches Republicans anything, itâ€™s that Democrats know the president is cornered. So if Republicans blow this opportunity â€” if they buy Obamaâ€™s bluff and capitulate as they did on the fiscal cliff â€” theyâ€™ll need more than a magic coin to save their political hides.

Meanwhile Obama — the most divisive, hyper-partisan president since Nixon — continues to do everything he can to goad Republicans into reacting angrily.Â  During the fiscal cliff drama, he started his end zone dance before his team had even scored, in a graceless campaign-style rally on New Year’s Eve. He preemptively insisted he would not negotiate over the debt ceiling — apparently the legislative branch is simply supposed to do his bidding.Â  And in a hastily called news conference yesterday, he relentlessly used terms like “absurd” and “irresponsible” to describe the opposition:

Republicans in Congress have two choices here:Â  They can act responsibly, and pay Americaâ€™s bills; or they can act irresponsibly, and put America through another economic crisis.Â  But they will not collect a ransom in exchange for not crashing the American economy.Â  The financial well-being of the American people is not leverage to be used.Â  The full faith and credit of the United States of America is not a bargaining chip.

And they better choose quickly, because time is running short.

Obama got away with ramming Obamacare down an unwilling America’s throat without a single Republican vote, while employing every legislative trick in the book in a race against time.Â  He paid for that by losing the House in the 2010 election, but won reelection for himself in 2012 — in part because Romneycare made his opponent uniquely unsuited to capitalize on the president’s Obamacare vulnerability.

Obama doesn’t know how to cooperate with Republicans, he only knows how to demonize them.Â  So far that’s been working for him.Â  Republicans need to choose their battles carefully.